My impressionable years where fashion is concerned were the early to late 70s. I can imagine many of you saying, “Oh, that explains how she dresses” about now! Turns out you wouldn’t be entirely wrong because it was a stylistic free-for-all back then. Twiggy was modeling everything from Flapper-era slip-dresses to baby-doll shifts and pleather trench coats to space-inspired garb; and if that’s not descriptive enough, it was the age of Qiana (if you have to Google it, you wouldn’t understand how challenging the era was)! 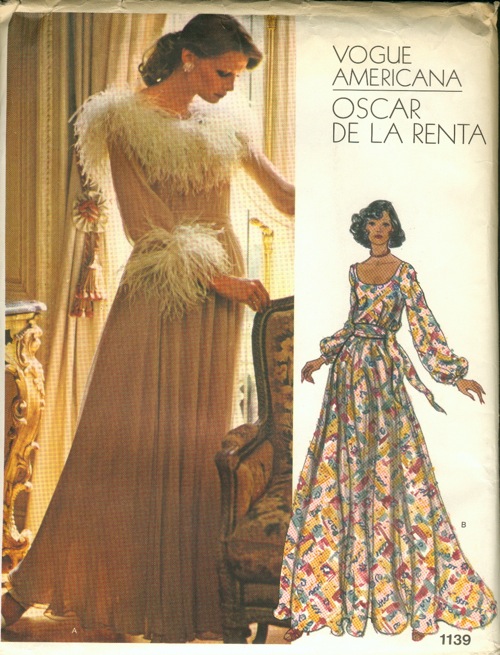 I was a sophomore in high school before I had a frame of reference for the distinction between haute couture and prêt-à-porter, realizing the difference when I saw the coverage of a smack-down between American and French fashion designers that took place at Versailles, called the 1973 Grand Divertissement, that year.

I knew the name of one of the five American fashion icons well, and for what might seem an odd reason to you in the day of such inexpensive ready-to-wear you often can’t buy fabric and thread cheaper than you can buy the piece of clothing it would make. The man I already admired was Oscar de la Renta, whose fashions I had seen on the covers of my favorite sewing patterns as I combed the fabric shop’s wide, heavy drawers for outfits my grandmother would help me make.

Many of his styles photographed and sketched on the rectangular envelopes had the same flowing quality I saw in magazines when supermodels like Karen Graham posed with layers of filmy fabric fanning out around them or sat supremely draped in silky folds that melted around their limbs like molten gold.

As soon as I had access to retail stores selling high-end fashions, I found an entirely new appreciation for his designs because he had such a refined sense of a fabric’s hand—the materials he chose conveying a dreamy sensuality beyond anything I’d ever touched. This helped me see why photographers were enamored with shooting many of his creations buffeted by mock wind.

I’ve never owned one of his gowns and I have often tried to imagine how his softer material choices, such as the panne velvet and silk jersey dresses I’ve seen, would feel against my skin. When I learned he loved to garden, I thought about how there’s a relationship between the luxuriant feeling of plunging the hands into soft, moist soil and to appreciating the seductive qualities of finely-woven textiles sliding across a wrist.

All of these thoughts surfaced when I saw his collection offered by Century Furniture as I was perusing their website in preparation for my most recent trip to the High Point Market. There are so many references to his legacy in the collection—the soft upholstery covering the Venetian sofa reminiscent of one of the first panne velvet gowns I saw when I searched for designs from his collections (similar to the one shown in this post); the trellis pattern on the slipper chair, which brings to mind the passion he had for gardening and his beautiful 2013 bridal collection; and the turned wood of his Rope Arm Chair, as classic as the refined furnishings in the gracious Connecticut estate in Kent that he called home when he was alive.

In the movie review for The New York Times, Rachel Saltz sets the scene: “What began as a clever stunt to raise money to restore Versailles — a fashion show featuring five French designers and five Americans — became a kind of battle: in one corner Europe, formal and staid; in the other the razzle-dazzle New World.

The winner in a K.O.: America!” Writing for the Huffington Post, KimAnn Schultz weighs in with this: “Philosophically, one of my favorite subjects is to justify fashion’s relevance historically and socially. Our ‘suiting up’ is not only the stuff that carries individuals through their days and endeavors, it marks time and place and reflects us as accurately as any song or news story might…

“Looking not quite so far back into the vast walk-in closet that is fashion history, we honor women from Elsa Schiaparelli to Eunice Johnson — creators, consumers and instigators who through their loves of fashion found ways to revolutionize what we wear, how we wear it, who wears it and when. Add now to that the story as told in Deborah Riley Draper’sVersailles 73 American Runway Revolution, a documentary vitally necessary to our contemporary fashion picture.”

As is the legacy of de la Renta, a point that makes me salute Century for turning the fashion visionary’s ideas into objects for the home. I truly look forward to seeing the furniture in person when I’m in High Point. Do you have a favorite Oscar de la Renta creation you’d like to share? I’m tapping the Oscar de la Renta tabletop designs at the New York Botanical Gardens as Signature Pieces for the home in this DesignStudio series.

The Modern Salonnière and this entry © Saxon Henry, all rights reserved. Saxon is an author, poet and strategist. Her books include Anywhere But Here, Stranded on the Road to Promise and Four Florida Moderns.

Footnote: I came across de la Renta’s tabletop designs at The New York Botanical Gardens when I visited the venue for their Groundbreakers Exhibition. It’s as pretty as I would have expected it to be!