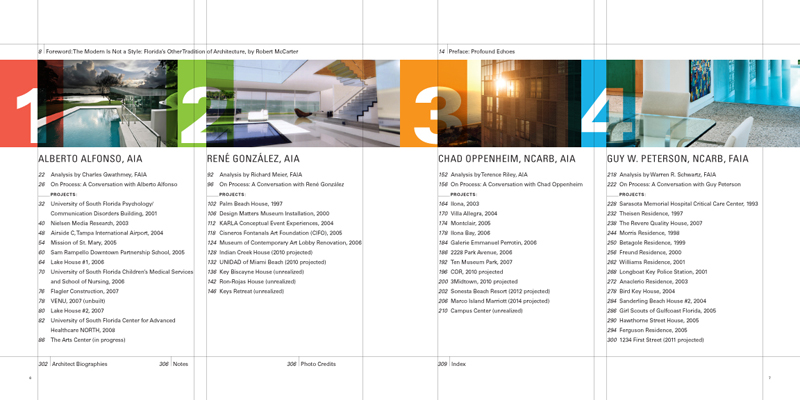 In his foreword for the book, Robert McCarter declares, “Modern architecture is alive and well and living in Florida.” If there were any question as to modernism’s longevity and influence on today’s generation of architects, the array of architectural styles and statements coming out of Florida from four of its best practitioners puts the matter to rest.

Alberto Alfonso, René González, Chad Oppenheim, and Guy Peterson—The Florida Four—are making a name for themselves in contemporary architectural circles, infusing modernist traditions with their own flair. Practitioners of modernism in Florida—or, more accurately, tropical modernism—they are producing noteworthy works that display their commitment to distinctive regionalism. This book is the first to showcase their rich and varied repertoires.

Each of the four architects has a unique take on modernism, resulting in four very different aesthetic approaches. From airports, medical facilities, and museums to open-air chapels, waterfront homes, and condominium complexes, their designs are fascinating for both their rootedness in modernist ideals and their dramatically different interpretations of it.

At once a striking visual tour and a thoughtful examination, Four Florida Moderns treats readers to the rich and innovative styles of tropical modernism as conceived by four trailblazing architects. 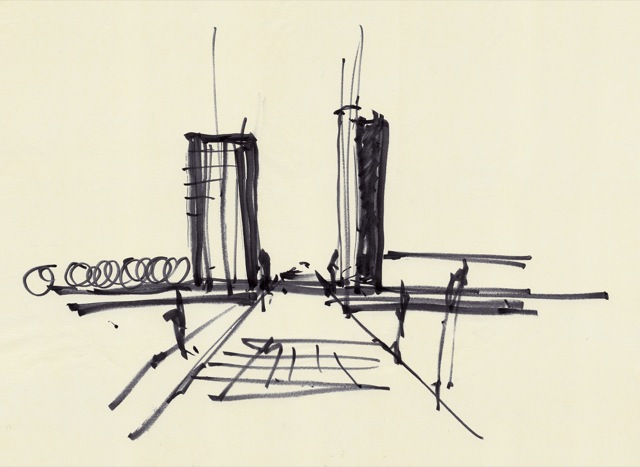 Here are a few of the reviews the book received:

“The architecture of Alfonso, Gonzales, Oppenheim, and Peterson testifies to the fact that modern architecture is not a style but a way of life. In their work, modernism evolves into a lyrical language. With informality, sensuousness, and relaxed atmospheres, their buildings thrive in the strong light and lush landscape of Florida. The strength of expression and primacy of geometry still exist as heroic gestures, but the possibility of intimacy in modernism as demonstrated by their work has never before been achieved. Their work goes beyond mere ideology and style. The buildings exist in harmony with their site and climate, mutating the tradition of modern into a melodic relationship between architecture and nature.” — Toshiko Mori, FAIA, principal, Toshiko Mori Architect, and former chair of the Department of Architecture, Harvard University Graduate School of Design

“Four Florida Moderns brings a fresh approach and outlook to Florida through the resolution of architectural problems in a tropical environment. In lush, striking photos, it highlights the work of four native architects, all of whom are acutely aware of the nature of the tropics and the romanticism of its qualities. By incorporating water, breezes, vistas, shadows, and heat into their work, the psychological appeal is impressive and undeniable. Their exploration and application of new materials and natural elements is innovative. I recommend this book highly.”—Mark Hampton, FAIA, Mark Hampton Architect, Miami, FL