In the film A Little Chaos, Alan Rickman, who plays an unlikely Louis XIV, declares, “Heaven shall be here.” He’s speaking of a ballroom he has commissioned for the gardens at Versailles, which will be realized by one of the most visionary landscape architects during the 17th-century, André le Nôtre (played by Matthias Schoenaerts), and a fictional character in the film, Sabine de Barra (played by Kate Winslet). Critics panned the film for its lack of historical accuracy even though Rickman, who co-wrote and directed it, never claimed it was factual.

Heaven Shall Be Here

As it does with the film, “heaven shall be here” applies to the aesthetics of Currey & Company’s new showroom in High Point, as well as the fact I had the chance to meet Clare Jameson of the UK-based Potterton Books during High Point Market a few weeks ago. I will share this remarkable experience once I’ve paid homage to Rickman, who was one of my favorite actors until, I very sadly write, he died in January. There are roles he’s played that I’ve enjoyed more than his interpretation of the French King (his portrayal of Colonel Brandon in Sense and Sensibility one of them) but the fact he co-wrote and directed this movie makes it a treasure in my personal collection of films.

The mention of historical accuracy above is apropos to both the film and my trip to High Point Market because it was a much discussed topic during the six-day design fest with Jameson and her assistant Simon Barton, who also came over from Great Britain for the event, attending. We all had the thrill of celebrating the ribbon cutting ceremonies, which I captured in the above video, and were treated to such terrific hospitality, as is the norm in the company’s showroom during Market. Anna Thrower knocked it out of the park with her festive menus, delicious desserts and vivaciousness; and the entertaining/event-planning prowess that oozes from Bethanne Matari’s DNA—making Currey & Company showroom a little piece of heaven each time market comes around—was operating at warp speed! Most of the photography here is by the beautiful Beth Tilley Green, whom I always enjoy during Market each time.

Adding depth to the experience was having Clare show me many of the exceptional books she curated for the event, and the fact that I was able to sit down with her for a proper interview to find out her path to being one of the most respected booksellers on two continents.

Her talents for curating were obvious as early as her university years when she instigated and organized an exhibition entitled Neo Classicism in the North, A Taste of the Antique. “Lord Clark of ‘Civilisation’ was Chancellor of the University and I was given the chance to curate this major exhibition, which was on view for a month,” she explains. “I spent a year sourcing and organizing the event.” She drew unique pieces from renowned 18th-century Yorkshire country houses and museums, which included the celebrated Robert and James Adam, and Thomas Chippendale, the noted cabinetmaker. Yorkshire was the richest county in England during this era and, being at the forefront of fashion, neoclassicism left and indelible mark on its country houses and the treasures within them. It was so successful they subsequently created a decorative arts scholarship for her when she left university.

It’s no surprise she was naturally comfortable with the decorative arts of all periods by then because she had attended auctions with her mother, who wrote about and collected antiques, from the time she was a child. “Our home in Oxford was filled with unusual antiques,” she says. “From the age of seven I compiled my own newspaper on antiques, the first issue including a pair of 18th-century Worcester sauce boats, as an example.” But her first love was reading and researching, her passion propelling her to spend hours in the university art bookshop, Blackwell’s in Oxford.

This youthful love affair with pages bound between covers took her to Phillips, Leeds, where she established the printed book department. After two years there, Potterton Books was born, which is named for the Jameson’s 18th-century house. Within three weeks of launching the business, she was selling to The British Museum. And thus, a brilliant entrepreneurial path had begun.

The treasures she brought to High Point included a massive boxed set of published drawings by McKim, Mead and White; Frank Lloyd Wright’s drawings; the Cecil Beaton Diaries; an antique series on various aspects of Tudor culture; and Views and Plans of the Petit Trianon at Versailles, which I couldn’t leave without!

I asked her about her point of view when she chooses titles, and she answered, “My books are eclectic because I collect the best of the new and prime examples of classics from the past. I like first editions but I don’t always have to have first editions because what I believe is important is preserving knowledge and making it accessible. Where would we be without historical influences?”

Jameson currently has somewhere between 10,000 and 15,000 books in stock, and most of her business comes to her through word-of-mouth. Her repeat business is phenomenal because she’s so careful in her choices. “I don’t buy at auction because, generally speaking, the books have been handled too much,” she explains. “I tend to buy small quantities—I’d rather buy 20 very good books at a time rather than boxes of them because I can inspect each one carefully in smaller numbers.”

Brownlee Currey met Clare at the Maison & Objet fair several years ago, his perusal of her stand sparking an idea some time later when he was trying to strategize how to increase the heft of the Currey & Company library housed in the manufacturer’s Atlanta headquarters. “When I first started thinking about expanding it, I wouldn’t have called it a library,” he says. “It was more a collection of books.”

His initial inspiration came when he walked into the office and noticed that a number of the computers belonging to the design team were set to Google searches. “It occurred to me that Google curates, but not necessarily with intelligence,” he explains; “and that’s when it dawned on me: if you want to be original and unique, you can’t rely too much on the web.”

From this moment that induced a self-described existential crisis, he began to think about how he could create a resource that would give the Currey & Company team higher quality inspirations, making a start by ordering books online. “It wasn’t long before I realized that what I was accomplishing wasn’t on par with what I wanted to achieve,” he says. “I decided to talk to my librarian friends and each of them said I needed to start organizing first. I let this advice percolate over a summer and I discovered no matter how much I thought about it, I was out of my depth.”

Then Brownlee bumped into Clare again in Paris. “I told her I wanted to build a resource for our designers for furniture, the decorative arts and lighting,” he explains. “She agreed to come to Atlanta for a few days and look at what I had already amassed. She helped me define the categories I should be collecting and began suggesting titles that would strengthen them.”

Brownlee notes that Clare taught him there are proverbial “bibles” in every important category and that identifying these is where she excels. He also shared one particular book he’d gleaned during High Point Market to illustrate the access she has to unique finds. “She has helped us source a fantastic collection of antique lighting trade catalogs from as early as 1827 and up to the 1950s,” he says. “I think we have around 130 of them now. They are so valuable because they give our design team the true aesthetics of the time.”

Reaching for and opening a lighting designer’s vintage-era sketchbook that Clare had found, he adds, “And look at this one: it was never published and doesn’t exist anywhere else but in our library—it was created by a lighting designer who was sketching out his ideas, and that’s invaluable inspiration for our designers now.”

Later that day, Clare and I sat marveling at the beauty the company had created in the new expanded showroom, she pointed to the chandeliers and pendants glittering overhead, and said, “When I look at them, I can see how styles have evolved over the years. I can see layers of history in this one view, and some of them may have come from our books!”

Where History Comes to Life

During a visit to the Currey & Company library late last year, I had to force myself to put my iPad in my purse to prevent myself from searching for copies of far too many books on their shelves for my own library! I did allow myself one new title from my day there, Garden Pavilions and the 18th Century French Court by Eleanor P. DeLorme. I have been savoring it ever since, and the chapter “Pavilions in the Age of Louis XIV: 1661-1715” presents the behind-the-scenes details from which a movie like A Little Chaos springs. I love the scene in the film in which the salonières are prancing through the outdoor rooms in formal dress!

DeLorme notes how the King’s confidence grew as he watched architect Louis Le Vau, who designed the famed Château Vaux-le-Vicomte for Nicolas Fouquet, work with the Baroque Era master le Nôtre to create the splendid gardens there. I have made a list of a number of properties in the book I’d like to visit the next time I’m in France, and I am grateful to have it as a resource as I plan the trip.

I so enjoyed meeting Clare and finding out that there is a kindred spirit in the world when I heard her say, “The hunt, la chasse, for the book gives me great pleasure because I’m always ready to learn.” If you find you want to begin or expand a design, architectural or cultural library, whether your interests are furniture, interior decoration, textiles or gardening (or all of the above like me), I don’t believe you will find a better resource than Potterton. Brownlee agrees: “I like to think we have the resonance of history in our products and I think that will become even stronger with Clare’s influence.”

It’s as Norman Cousins says, “A library is the delivery room for the birth of ideas, a place where history comes to life,” and I can’t wait to get back to Atlanta to dig around in the Currey & Company birthing center—that is one experience that will have me declaring Heaven Shall Be Here!

For a taste of what was trending in High Point, here’s a peek at the best selling items during spring market: 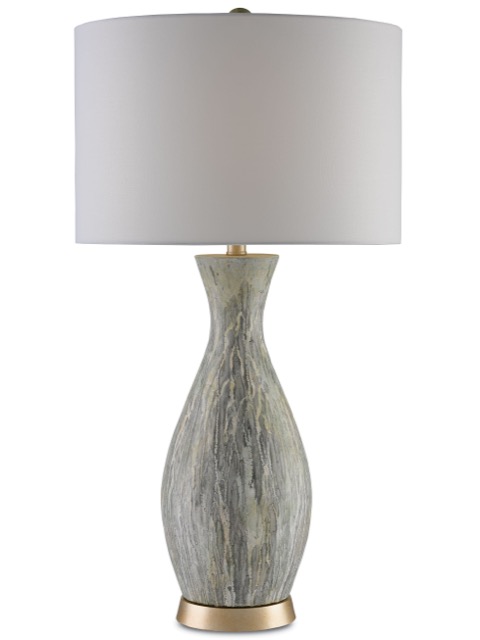 The Rana table lamp made of terracotta and wood in a light green and white drip glaze finish with silver leaf accents. The shade is blanco linen. 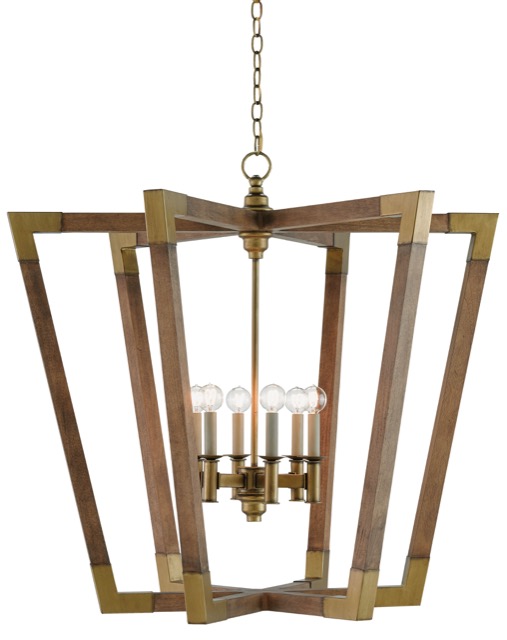 Footnote: One of Rickman’s A Little Chaos co-writers was Jeremy Brock, who also wrote Mrs Brown, which I featured here several weeks ago.

The Modern Salonnière and this entry, Heaven Shall Be Here, © Saxon Henry, all rights reserved. Saxon is an author, poet and SEO strategist. Her books include Anywhere But Here, Stranded on the Road to Promise and Four Florida Moderns.