The books I’ve been reading about Horace Walpole since I returned from my trip to London to attend The Decorative Antiques & Textiles Fair in late April proves there was more than a smidge of tragicomedy in the eighteenth-century writer. Not entirely comfortably, I’m also finding that I have more in common with the popular dandy than I would have imagined. First, I share his desire to leave a legacy as a writer and a person, and I have a similar fascination (okay, it’s an obsession) for all things Tudor.

He was equally a fan of the highly stylized interior as I am, a circumstance I saw clearly during a tour of his famed country house, Strawberry Hill in Twickenham, the day before I attended the fair. This made my experience of walking the show floor a Spike Jonze-ian exercise along the lines of “Being” Horace Walpole!

But I wasn’t in an eighteenth-century mindset as I Instagrammed #WhatHoraceWouldBuy after visiting each booth: I was imagining him alive today, traipsing (he was known for it) along in a modern version of one of the luxuriant outfits captured in the portraits of him, although I confess I may need a bit of help figuring out what a contemporary equivalent for a pale satin waistcoat and matching knee breeches complemented by a pure white shirt with lacey adornment and a ruched collar would be! Maybe I should email Prince?

So the idea was that he would have been shopping for the largely unfurnished gothic mansion as it is today—the shell now restored to its former glory as closely as the Strawberry Hill Trust could come with the information available to them.

Before I present my antiquarian finds that I believe might pique his interest, a bit of a backstory about the house. The restoration was accomplished in two phases, the second of which was just completed, opening more of the house to tours in March (2015). Walpole began building the rambling gothic mise-en-scène at the age of 30, purchasing a pair of small houses on a large swath of property along a fashionable section of the River Thames in 1747.

As he acquired paintings, baubles and furnishings, he often outgrew the rooms he’d rendered with his pals Richard Bentley and John Chute, a clique Walpole dubbed the Committee of Taste.

As a result Strawberry Hill became the sprawling spired and turret-topped bon-bon of a residence it was when he died in 1797, 50 years after he’d bought it.

In their roles as draftsmen and architects, Bentley and Chute were not unlike a pair of set decorators creating a backdrop for a director whose aim was to craft a fantastical period-specific film.

One of my favorite rooms on the tour is quite non-descript compared to the more ostentatious spaces like the Gallery, the Library and the Grand Drawing Room. It’s the Green Closet adjacent to the Breakfast Room and the Blue Bedchamber.

It was Walpole’s study where he wrote most of his letters, which have gained him as much renown as his fiction has.

He was such a firm believer in legacy that he was known to annotate his letters to make them historically complete.

He asked his friends to bundle them up from time to time and send them back to him so he could organize them and add anecdotal caveats to them.

The Castle of Otranto Written at Strawberry Hill

It’s a testament to his desire to leave something to the world, which he did with his novels like the Castle of Otranto (written at Strawberry Hill), that he has become known as one of the world’s great contributors to the epistolary arts. On his Grand Tour through Italy with poet Thomas Gray, for example, he wrote to his pal Richard West about the then recent discovery of the town of Herculaneum, which had been buried during one of the major eruptions of Vesuvius. That was in 1740, and he returns years later to add a footnote to the letter stating that eight years after he wrote the initial missive Pompeii was discovered!

His notoriety as a pen pal led Carrie Frye, writing for Longreads, to call his letters “marvelous little masterpieces: subtle, witty, and dripping with description and gossip and observation. They read like the literary equivalent of a cat curling itself around your ankles, showing off, sure, but glad to see you all the same.”

She’s spot-on, and I highly recommend them as a serious historic survey of his time—all four volumes! And a quick FYI: 2016 is the tercentenary of Thomas Gray’s birth so there is quite a bit going on around his legacy.

The other room I absolutely adored at Strawberry Hill was the Library (no surprise there). It was a sumptuous space that must have been a treasure-trove of knowledge when he was alive.

The kicker to this story is that one of the largest collectors of Walpoliana was Wilmarth Sheldon Lewis, a Yale graduate who bequeathed his collection to the university. He had amassed more than half of the traceable volumes in the Walpole library before his death. His cache numbers 32,000 and are housed in the Walpole Lewis Library in Farmington, Connecticut, along with other important artifacts from the Brit’s life and home. It’s a veritable museum of a literary legacy. You can bet I will be paying the library a visit in the not-too-distant future!

One of the reasons I believe the rooms at Strawberry Hill are truly magical is that no amount of imagination was spared by the Committee of Taste, notable inspirations include a jaw-dropping number of historically significant architectural elements, which I list as a footnote at the end of this post.

I expect that touring the home I have now dubbed Tudor-upon-Twickenham will remain a literary-design highlight in my life, especially since it was followed by two days haunting the wares at The Decorative Fair in order to furnish the rooms of the gothic manor house (in my imagination, of course); Walpole wasn’t around to bankroll the project.

A standout attribute of this particular fair is that purveyors who reserve booths arrange them as if they are room settings. You can see from the images in this post how that would set my mind to musing as I channeled Mr. Walpole, England’s first Prime Minister’s son, as he decorated a modern version of Strawberry Hill today.

In case you want to attend, the next fair takes place from September 29 through October 4, 2015—this is an important function because it kicks off the 30th anniversary celebration for the brand, which holds its fairs three times each year in Battersea Park. I suggest you book your tickets and reserve your rooms now if you want to have access to exquisite antiques and vintage finds of a remarkable variety (who knows how strong the dollar will stay against the pound by the time you realize you absolutely must be there). 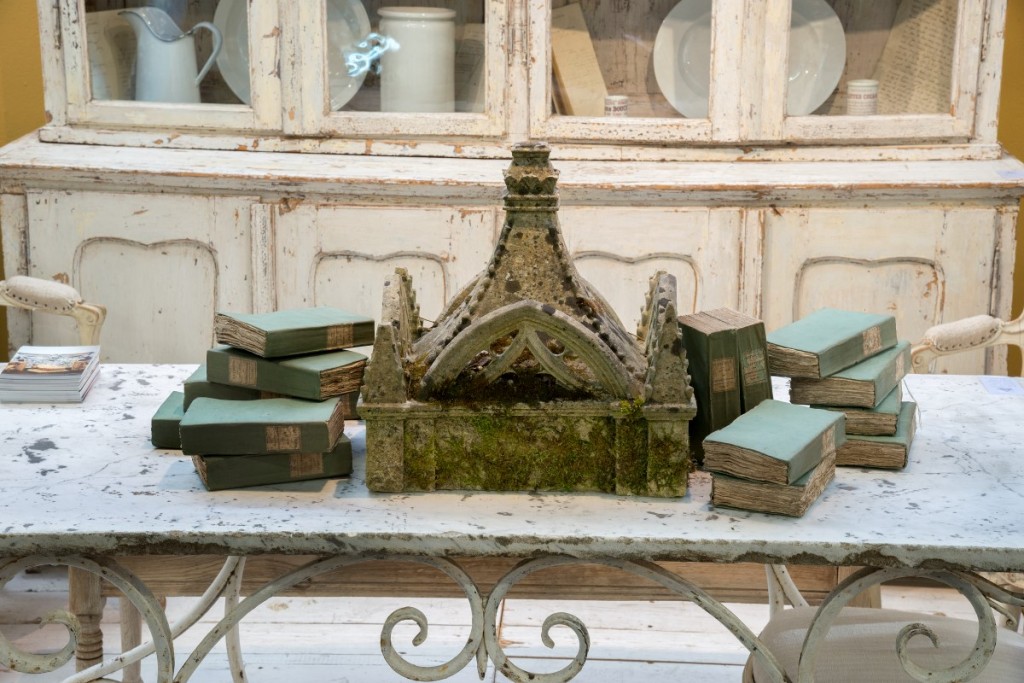 This Gothic Stone Ornament in the Appley Hoare Antiques booth would have been a shoe-in for Walpole’s Strawberry Hill Redux. 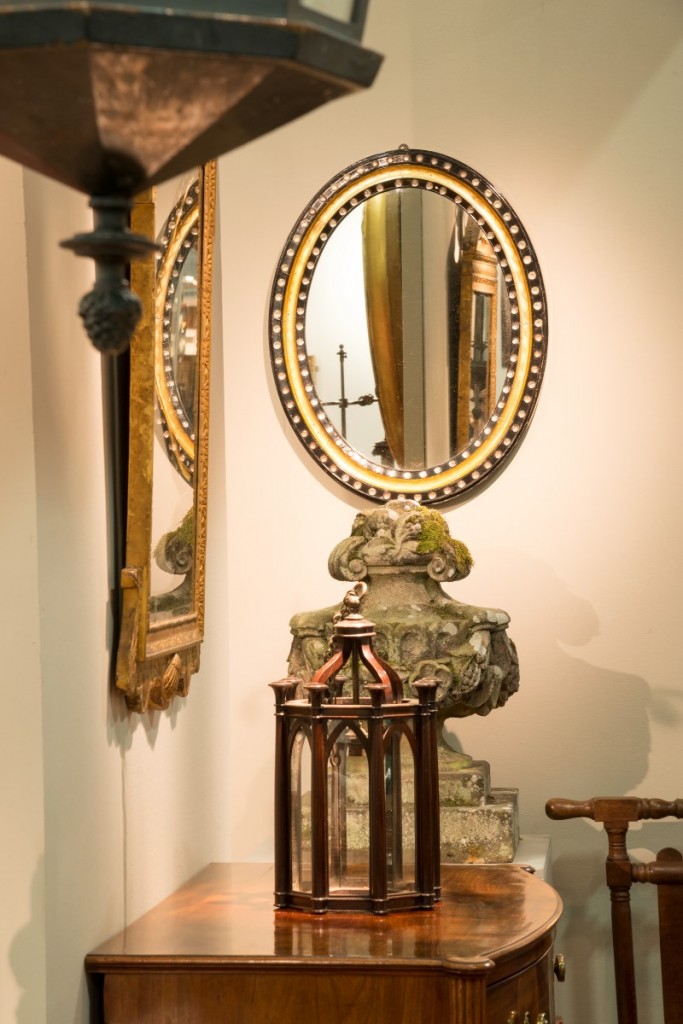 This shot of the David Bedale booth at the Decorative Fair shows a gothic lantern that would have made Walpole’s delicate little heart go pitty-pat! 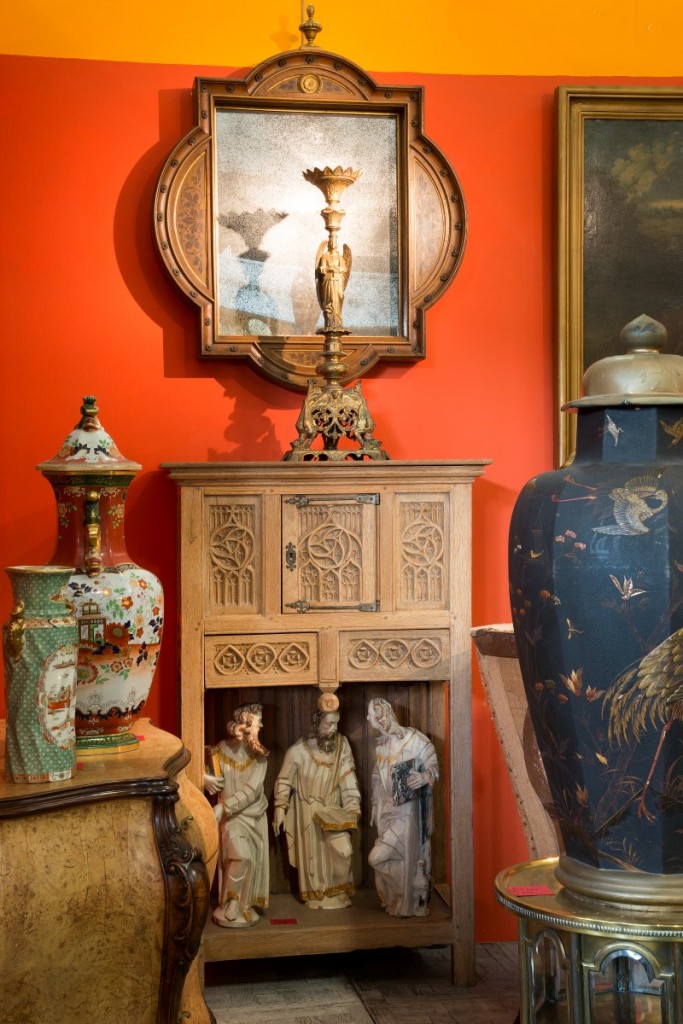 Walpole would have been saying, “Uh-huh; now that’s what I’m talking about,” when he laid eyes on the Pearse Lukies booth at the Decorative Fair! 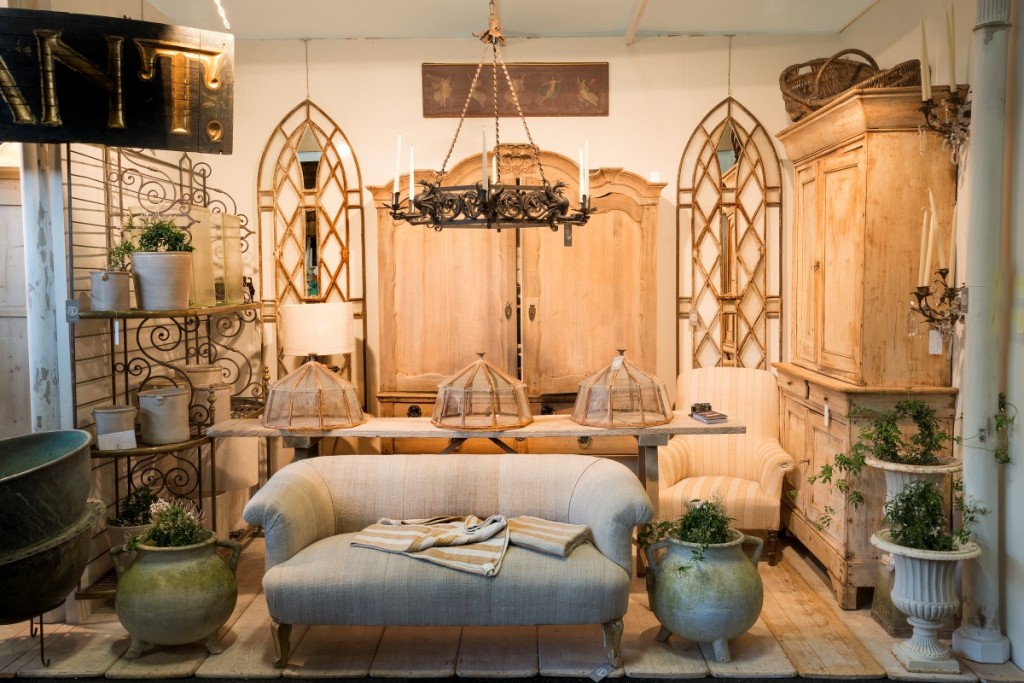 The No.1 Lewes stand at the Decorative Fair would have seen quite a bit of Walpole cha-ching during his stroll through the market! Some of my favorite stands had either a British or a French interiors flair.

There was no way I could fit all of the great images I took of Strawberry Hill and The Decorative Fair in this post so I will be creating Saxon Henry on Pinterest boards this week (click on the name of the one you’d like to see and voilà!). Let me know if you spot a favorite item from the fair or a room-shot from Strawberry Hill, will you? 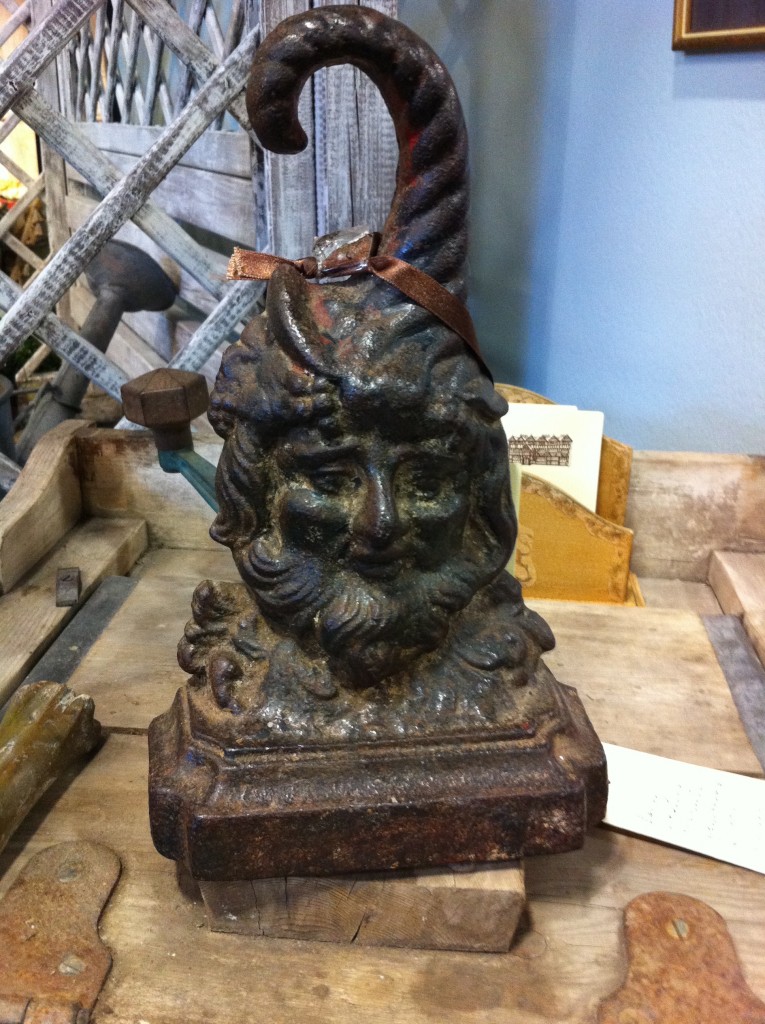 This Saracen’s Head doorstop in the Serendipity Antiques stand would have been snapped up by Walpole, who peppered Strawberry Hill with the symbolism. By the way, one of his favorite quotes was: “Serendipity ~ being able to make delightful discoveries purely by accident.” It’s no accident this stand held some lovely gothic elements!

The Modern Salonnière and Horace Walpole Shops The Decorative Fair © Saxon Henry, all rights reserved. Saxon is an author, poet and strategist. Her books include Anywhere But Here, Stranded on the Road to Promise and Four Florida Moderns.