A private place in which to write…

As someone whose life is spent working with words for at least a part of every day, I find myself obsessively scouring the biographies I read for mentions of the rooms in which lauded writers made their magic. Descriptions of them exist more often than visuals do so I find myself having to resort to imagining these rooms in which my literary heroes chose to spend their most important hours.

Rooms of Their Own

I recently came across a number of visuals that stopped me in my tracks for the potentiality they held as the writing retreats of three authors I admire greatly. These rooms of their own were revealed when I pulled the Currey & Company press kit from the collateral I’d collected at High Point Market.

The art direction and styling by Thea Beasley—photographed beautifully by Mali Azima—presented “rooms” in which I could so easily imagine these writers holding sway. I present them, paired with an author, below. I had immediate visceral reactions to Anaïs Nin, Katherine Mansfield and Elizabeth Bishop making these vignettes their own as they went about the important work of putting words on paper.

Be sure to read through the entire piece because I end the post with Thea’s thoughts about her process of styling and her point of view about these shots in particular. The entire effort was so alluringly conceived by Cecil Adams, Currey & Company’s creative director. I salute Cecil’s vision in raising the bar when it comes to design storytelling.

Anaïs Nin is one of the most famous diarists of all time. She left voluminous annotations about her life totaling 35,000 hand-written pages, which she composed between 1914 and 1977. Her initial journals were bound volumes but by 1947 her correspondence had grown so extensive she wrote by hand on loose sheets of paper that she kept in order and filed fastidiously. By the time she prepared the material for publication, her diaries numbered 69. I can easily envision her in the lovely light-filled space featured above as she penned this entry from May 8, 1921:

“I have a literary triumph to share with you. I feel as if you have the right to know that you are not destined to be the Diary of a frivolous, scatterbrained girl. No, rejoice, my patient confidant! I have made a wonderful discovery about Mlle. Linotte’s* literary possibilities. And this is the way it came about. Even in my Rip Van Winkle world, as far as modern books are concerned, I could not help being rendered deaf by the name of the most talked-of book of the season, Main Street, by Sinclair Lewis.

“The book stared at me from every bookstall and library; its name was in every mouth. I reached the conclusion that not to read Main Street was an offence to Literature. So I bought it with a beating heart, read it and, filled with horror and dislike, paced up and down my room, saying to myself in plain colloquial language: ‘Now what is the matter with me? Here is a book everybody likes. Why on earth should I be so ‘fussy’ and old fashioned? Am I going to be a ‘highbrow,’ a pedant?’ Then sadly I sat by my writing table and scribbled this opinion on scraps of paper: “Main Street has given me a thorough, merciless mental shock…”

The entry goes on for quite some time and I can just see Nin, pacing in front of the Delano desk, agitated as she switches on the Tomorrow table lamp and sits down to write, her brow furrowed in concentration as she purges her soul of this shock. [*Linotte in Nin’s diary is her alter ego. The word Linotte in translation is slang for featherhead.]

“I want a garden, a small house, grass, animals, books, pictures, music,” wrote fiction writer Katherine Mansfield, one of New Zealand’s most famous authors. “And out of this, the expression of this, I want to be writing.” Though she lived a short life—dying at only 34 years old—she left a meaningful body of collected short stories that include “The Garden Party,” “Bliss” and “Prelude.”

In the book Diaries and Journals of Literary Women from Fanny Burney to Virginia Woolf, author Judy Simons mined this from the writer’s journals: “This evening I have sat in my chair with my reading lamp turned low, and given myself up to thoughts of the years that have passed. Like a strain of minor music they have surged across my heart and the memory of them, sweet and fragrant as the perfume of my flowers, has sent a strange thrill of comfort through my tired brain.”

I envision Mansfield nestled into the Avignon chair, her legs crossed at the ankles on the Avignon ottoman, a dreamy look in her eyes as she considers the measure of her days.

It seems to me that poet Elizabeth Bishop created her works within a record-setting number of rooms of her own—her life taking her from Nova Scotia, New York, Key West and Maine to San Francisco, Paris, Mexico, Brazil and Boston. Born in Worcester, Massachusetts, she didn’t have an easy life but she had an impactful one as a prolific poet, a painter, a beloved friend to writers like Robert Lowell (their published letters are a beautiful and critically important read), and a lauded teacher. I immediately thought of her poem “Sonnet,” which she wrote in1928 and included in Poems Written in Youth, when I saw this space:

I am in need of music that would flow

Over my fretful, feeling finger-tips,

Over my bitter-tainted, trembling lips,

With melody, deep, clear, and liquid-slow.

Oh, for the healing swaying, old and low,

Of some song sung to rest the tired dead,

A song to fall like water on my head,

And over quivering limbs, dream flushed to glow!

There is magic made by melody:

A spell of rest, and quiet breath, and cool

To the subaqueous stillness of the sea,

And floats forever in a moon-green pool,

Held in the arms of rhythm and of sleep.

In my fantasy of Bishop in this room, I see her striding in circles around the Factory table, her hand raised and rhythmically moving as she marks the time of the sonnet’s language. She stops and smiles, knowing she’s succeeded, turns on the gramophone, and sinks into the Kingswood wing chair as the jazzy sound of Benny Goodman’s Boys’ “Jungle Blues” spills into the handsome room—“magic made by melody,” indeed! 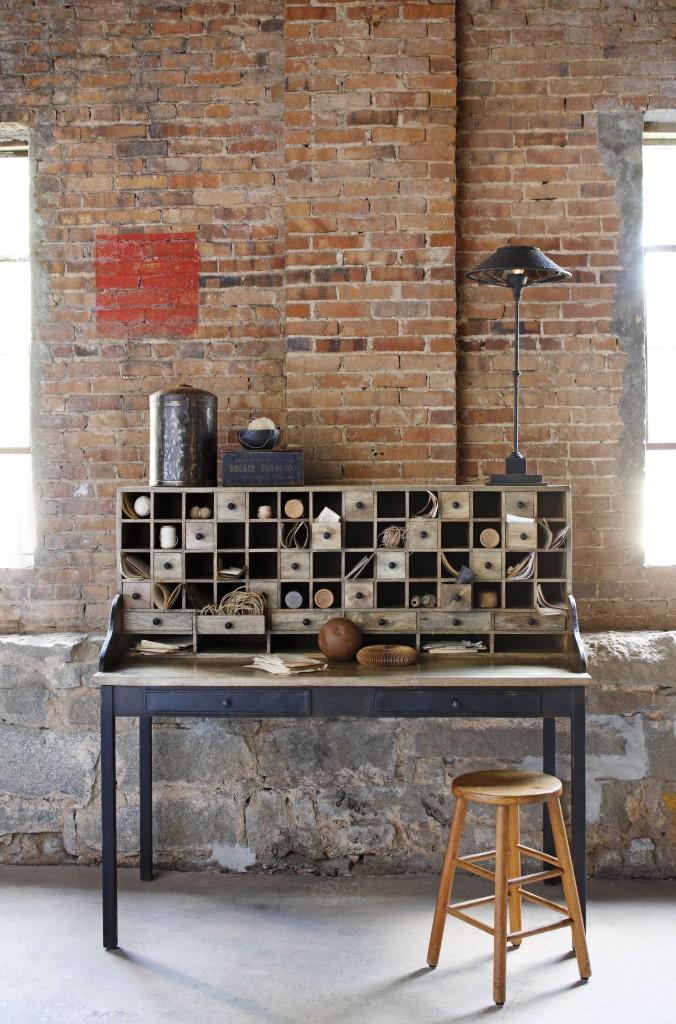 When I asked Thea what was on her mind when she styled these spaces that feel so perfectly writerly, she told me, “It’s so prescient of you to hone in on that. With the Avignon chair and ottoman, I was absolutely thinking of a writer’s, specifically a horticulturist’s, retreat to reference the mushrooms and organic farm in Sparta where we shot that image. I even went so far, to Cecil’s delight, as to pen up a story for the typewriter!”

Thea says she almost always creates a narrative in her head for projects, which sets the tone and helps her to flesh out each vignette. “Details matter a great deal to me, even the ones never seen or rarely noticed.” It’s imperative to have things very well strategized, she adds, because once on the set, there is no running out to source props. That doesn’t mean there isn’t room for creativity to flourish during a shoot: “The plan is never set in stone and the process of creating the image is organic each and every time.”

Though calling writers to mind isn’t always in the mix, Thea explains she is continually cognizant of channeling Creatives when she is planning her set decoration. “I feel part of my job as stylist is to instruct in the life of the creative, the inspirational and the aspirational.”

When the day is done, she has a restful retreat of her own to return to, the fact she values her own personal space so dearly likely one of the reasons she is so adept at making her vignettes feel so tranquil. “I come home to my loft to recharge and reflect,” she remarks. “It’s a wonderful rambling old building and my spaces hold mostly white. I love color, and adore working with it, but when home I need simple and serene.”

Being comfortable with rearranging furnishings for work, it’s no surprise Thea enjoys keeping things fresh at home: “I like to move things about, always creating new vignettes and combinations; the assemblage is always changing.”

I’d like to thank Cecil and Thea for my three new favorite visuals for writing retreats and to ask if you agreed with the writers I assigned these spaces. I’d also like to know if this type of post is one you’d like to see again. Leave me a comment if this intermingling of storytelling and design is enjoyable to you.

The Modern Salonnière and this DesignLabs post Rooms of Their Own © Saxon Henry, all rights reserved. Saxon is an author, poet and strategist. Her books include Anywhere But Here, Stranded on the Road to Promise and  Four Florida Moderns.