All, all are gone, the old familiar faces… 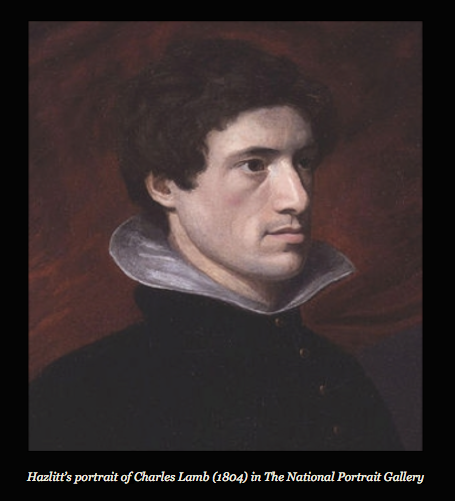 These three lines of verse illustrating Charles Lamb’s feelings of loss for the pals who brought intellectual stimulation into his life couldn’t be more meaningful to kick off this #DesignSalon post. I culled them from the poem The Old Familiar Faces, a phrase that is resonant even for the design aspects of the narrative. Lamb left the earth 180 years ago but profound echoes of him exist today, and not just in his writing. He also inspired a social legacy that has been a mainstay in Manhattan for a little over 140 years.

This bequest to Gotham is The Lambs Club, an infamous restaurant tucked into The Chatwal, one of New York City’s luxury boutique hotels in the heart of the Theater District. As the name suggests, the eatery has a direct connection to the Brit, which is why I chose to venture there on a blustery March evening several weeks ago. The inspiration for the restaurant’s name was a British actor’s nod to weekly salons that Lamb and his sister Mary hosted in their London home.

During its heyday in the late 1700s and early 1800s, it drew some of the most avant-garde journalists and literary figures to 4 Inner Temple Lane. William Hazlitt, Leigh Hunt, Barry Cornwall (whose real name was Bryan Procter), William Godwin, Martin Burney, Henry Crabb Robinson, Charles Kemble and Fanny Kelly were regulars. On “red-letter occasions,” Edward Gilpin Johnson explains in the introduction to The Best Letters of Charles Lamb, Coleridge and Wordsworth were in attendance.

Johnson describes the setting surrounding the creatives, who met each Wednesday, as gathering around “a clear fire” and “a clean hearth.” One of the first things I noticed as I took my seat in The Lambs Club was a massive fireplace, its hearth clean and its interior ablaze. But that’s where the similarities ended between the Lambs’ salons and the tony eatery.

Dinner at The Lambs Club

Nowhere was the departure more striking than with the food. The menu at the Manhattan hotspot, presided over by Chef Geoffrey Zakarian, is a far cry from the fare Charles and Mary served during their mid-week soirees, which Johnson described as cold roast lamb or boiled beef, heaps of smoking roasted potatoes, and a vast jug of porter that was often replenished from the foaming pots of the best tap on Fleet Street.

I ordered the Amish Chicken that evening, which was remarkably tender and flavorful, and a glass of Albariño. Tucked into a corner of one of the banquettes, I had the perfect seat to study the Art Deco-on-steroids atmosphere awash in red leather, polished chrome and satiny black woodwork.

The restaurant was treated to a makeover when the building was updated in September 2010, the project instituted by the owners of The Chatwal. They tapped architect Thierry Despont to infuse the building with his interpretation of upscale prohibition-era style and he took the assignment to heart.

The building is landmarked so the New York City Landmarks Preservation Commission required that the façade and many of the interior design elements be retained in the renovation. One of the most dramatic elements in the restaurant in this category is the massive stone fireplace, which Stanford White—the building’s original architect—gave to The Lambs.

Given the chilling wind I’d navigated through as I trekked over from Times Square, I was happy to be watching the flames blaze as I studied the vintage black-and-white portraits of The Lambs and Shepherds, as their leaders are known, framed into the black lacquered floor-to-ceiling paneling.

Though no longer the current official meeting place for The Lambs Club, which is now headquartered at 3 West 51st Street near Rockefeller Center, the restaurant still pays homage to these members, 6,000 in all to date. Among those “old familiar faces” staring out into the room from the lacquered wall panels are some famous names that include Irving Berlin; Cecil B. DeMille; Maurice, Lionel and John Barrymore; Douglas Fairbanks; John Wayne; Richard Rodgers; Spencer Tracy; Oscar Hammerstein II; and Fred Astaire, who is said to have quipped, “When I was made a Lamb, I felt I had been knighted.”

That British actor who founded the club in London in 1868 was John Hare, who saw the club as a riff on the Lambs’ idea of gathering like-minded people into a social circle. One of the members of Hare’s group, Henry James Montague, was a young actor making his mark on the London stage at the time. Looking to conquer US audiences, he made is way to New York City and founded The Lambs Club in Manhattan during Christmas week in 1874—just a week shy of the 40th anniversary of Charles Lamb’s death.

The original gathering place for the Manhattan dramatists was Delmonico’s Restaurant in Union Square. Maison Doree, the Union Square Hotel, the Gilsey House, and Keen’s Chophouse are a few other locales the organization tapped as meeting spots until its socialites settled into the West 44th-Street building that now houses The Chatwal.

Time slipped away as I sat reading Charles and Mary Lamb’s Tales from Shakespeare that evening. The prose book by the siblings was meant to bring Shakespeare’s plays to life for children. First published in 1807, it has never been out of print since. That’s quite a literary legacy, I’d say; wouldn’t you?

The Legacy of The Lambs Club

History swirled around me as I thought about the centuries cascading back to their London salon and moved forward in time to that young actor determined to take New York by storm. An article in the August 1912 issue of The Theatre Magazine described him as, “a fine looking young fellow with considerably more personal beauty than professional talent.”

Never a shortage of snarky critics, I thought when I read the piece in which the journalist went on to say, “The women of New York went literally crazy over Harry Montague, and he was the first to achieve the distinction of being called the ‘matinee idol,’ a title which has been since bestowed on many a smarter man.”

Also in The Theater Magazine was a Clarence Stratton ballade declaring, “On the boards their craft they show”; the greatest scenes “a gorgeous cage” where “bright plumed birds strut to and fro…” He could have been describing the backdrop I was watching fill with vivacious young professionals enjoying specialty cocktails and a pre-theater nosh, each table telling the waiter their curtain times as they placed their orders.

I couldn’t help but wonder what Charles and Mary would have thought about the New Yorkers surrounding me, most tables engaged in rowdy conversations about the news of the day, a litany of tough subjects that included nuclear treaty talks with Iran, the Boston Bomber case and ISIS attacks in Tunisia.

During my travels to London later this week, I’ll visit Inner Temple Lane and explore other haunts where Charles Lamb was known to roam in Covent Garden, my impressions going straight into my writer’s notebooks, of course. Barry Cornwall described Lamb as a small, spare man clothed in black. “You could not mistake him,” he remembered. “He was somewhat stiff in his manner, and almost clerical in dress, which indicated much wear.”

Lamb couldn’t have been more opposite from the throng gathered at the Manhattan restaurant that night. They celebrated his memory by the very act of keeping the restaurant alive, though I would wager a small percentage of the revelers, if any, realized it was his legacy they were supporting that evening.

The image of a terrace at The Chatwal (below) is my idea of a dreamy place to write.

This entry © Saxon Henry, all rights reserved. Saxon Henry is an author, poet and strategist. Her books include Anywhere But Here, Stranded on the Road to Promise and Four Florida Moderns.