“As the momentous words ‘England is now, therefore, in a state of war with Germany’ came somberly over the radio, Major James Bigglesworth, D.S.O., better known as Biggles, switched off the instrument and turned to face his friends, Captain the Honourable Algernon Lacey, M.C., and ‘Ginger’ Hebblethwaite. There was a peculiar smile on his face.” 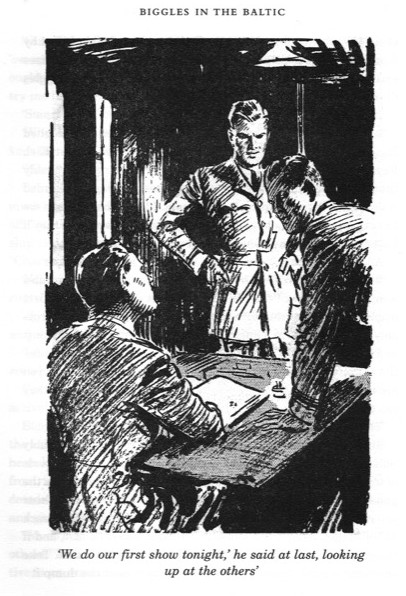 Thus begins Captain W.E. Johns’s YA novel Biggles in the Baltic, one of over 100 books penned by the former fighting pilot of the Royal Flying Corps who created one of the most popular war heroes of the 20th-century. Biggles first captured the imaginations of British boys in 1932, and their desire for new stories wasn’t thwarted until Biggles’ last adventure was published during the 1960s.

Proof positive of this fascination is a notable name in the design industry who remembers relishing Johns’s fiction as a boy, the thrill of breaking the cover on a new novel to lose himself in Biggles’ next escapade fodder for a recently launched collection of furniture. The designer’s name is Timothy Oulton and, as he says, “Tally ho, and buckle up for the ride,” because I’m about to give you a peek at the new Adventurer Collection I saw during a walkthrough of the his eponymous gallery at ABC Carpet & Home recently.

The Bayswater sofa, covered in wrecked white leather, anchors the above vignette featuring furnishings in the new collection. I was surprised at how soft the hide felt as I sunk into the roomy sofa, a comfortable “give” they achieve by turning the leather inside out and enzyme washing it to a matte finish. Providing a new product with a timeworn feeling is a particular talent for this designer, not a surprise given his father—an antiques dealer in Manchester, England—surrounded him with heirlooms as young as he can remember.

The Airfoil desk was inspired by the wings of vintage airplanes on par with those Biggles would have flown as he zigzagged the world fighting the bad guys. The handsome desk with a riveted surface projects a nostalgic texture, the patterns all the more compelling given how the shiny steel surface reflects light to magnify the detailing.

The frame of the Explorer achieves the same effect, the masculine sofa with its distressed leather upholstery so perfect for an adventurer’s lair. Can’t you see Biggles easing down on it to rest muscles sore from untold hours in the cockpit, his expression eager as he bends down to unlace his boots?

Don’t you think he’d be so happy to toss his cap with its RFC medallion penned to the front onto the Tracks coffee table? He’d lean back with a sigh, the events of his latest mission racing through his mind as he looked over at the Airfoil desk strewn with maps and charts, knowing that the report he must write will be a challenging one.

Biggles in the Baltic on a Tough Assignment

The danger of this escapade is summed up near the end of Biggles in the Baltic, as he and his friends check back in with Colonel Raymond, who sent them on one of their toughest assignments to date. The Colonel tells the trio:

“‘You were in enemy waters, with hostile craft all around you, both on the sea and in the air… No, Bigglesworth, it couldn’t have last more than a few days at the very outside. When you went out of this door I never expected to see you again.’

As soft light from the Geode pendant wafted down on his mussed hair, he would hear the Colonel’s last words as if he were sitting in the Willow armchair nearby: “‘…don’t go too far away.’

‘Because—well, you see, we may need you again.’”

A toast to this talented designer for creating such a beautifully branded company, and a daring new collection that reflects depth and dexterity. It’s no surprise he is a self-confessed antiques and flea market addict, his haunts in Great Britain and across Europe providing him with ample inspiration for his furniture designs—the efforts paying off beautifully if I might say so.

I’m over the moon to be able to feature this literary design adventure here on the Improvateur blog because the thought he puts into his products is one of the best examples I’ve seen of DesignStudio authenticity to date. It’s also the perfect illustration of that point where literature and design intersect. Happy gallivanting, everyone!

The Modern Salonnière and Timothy Oulton Design Adventurer © Saxon Henry, all rights reserved. Saxon is an author, poet and SEO strategist whose books include Anywhere But Here, Stranded on the Road to Promise and Four Florida Moderns.