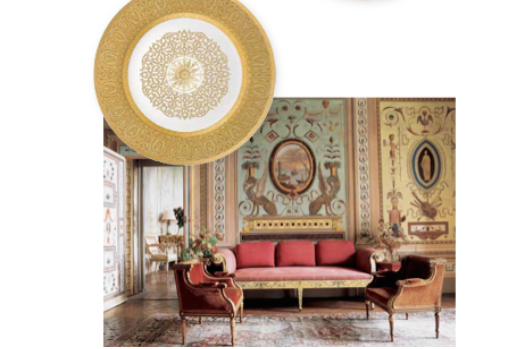 Nest Nest Nest features the Alliage pattern.As I write this, I can feel the design energy draining from the Americas as the movers-and-shakers in our industry trek across the Atlantic to Paris for Maison & Objet. During the last iteration of the French fair, I followed the savvy coverage by Tamara Matthews Stephenson, and was particularly enthralled by her trending categories “tabletop explosion” and “return to classic design.” The former noted a Raynaud Limoges collaboration with Fromental featuring the Paradis pattern of china and Paradiso wallpaper (shown below); and the latter included Bernardaud’s Alliage pattern (above), the design of which was inspired by historic European palaces. We may never be royals but we can certainly dine like them!

The post led me to the Bernardaud site where I became absorbed in “The Historic Table” page featuring patterns in the Ancienne Manufacture Royale (AMR) program strengthened by Louis XVI in 1774. As I was ogling patterns designed for Louis XV and Marie-Antoinette, both festively displayed on sumptuously set tables, I read about how Bernardaud purchased these and the other AMR patterns to reproduce the masterpieces. The company is a perfect fit because their factory meets the Manufacture de Sèvres requirements that keeps the production close to the raw materials used to create the porcelain. How historic are we talking? The Louis XV pattern was bought by the King in 1757 for the Fontainebleau, and was used on a daily basis in the Fontainebleau palace.

I don’t think it’s any secret that I covet certain things: magnificent décor products, historical narratives and books of nearly all stripes. Since we know how Louis XV would set his table (thanks to Bernardaud), I am posing a DesignSalon question with this article: how would I set the table if Louis XV were coming to dinner? I’m making a stab at my selection of porcelain based upon his dining habits, which are a matter of record (as are those of his great grandfather’s Louis XIV) in a three-volume set of beautifully ragged books I own titled Memoirs of Louis XIV and the Regency.

I found them at the Strand Bookstore several years ago, and I have been waiting for the right time to use them. Voilà! seems to be a fitting exclamation in this moment, don’t you think? The books, written by another Louis—the duc de Saint-Simon, who is known as one of the world’s great memoirists—are filled with remarkable details about the actions and habits of the court during Louis XIV’s time, the last volume covering the years when Louis XV—the Sun King’s great grandson—was doted upon as a Prince of the blood.

The spine of Volume II cracks angrily when I open it to the chapter in which Saint-Simon describes the birth of the baby Prince: “On Saturday, the 15th of February, the King was waked up [sic] at seven o’clock in the morning, an hour earlier than usual, because Madame la Duchesse de Bourgogne was in the pains of labor. He dressed himself diligently in order to go to her. She did not keep him waiting long. At three minutes and three seconds after eight o’clock, she brought into the world a Duc d’Anjou, who is the King Louise XV, at present reigning, which caused a great joy.”

Cardinal de Janson sprinkles the newborn, the newest of the royals, with holy water in the chamber where he was born, reports Saint-Simon, and is then carried “upon the knees of the Duchess de Ventadour in the sedan chair of the King into the King’s apartments, accompanied by Maréchal de Boufflers and by the bodyguards with officers.” Before long, it was time for all the Court to see him.

This is how prolifically Saint-Simon reports on the daily activities of the royals within the palaces these monarchs inhabited, each one testaments to historic design eras. When the elder King was on the throne, it was one of the most lavish periods in design that saw a French embracing of Italian Baroque so ornate it’s a wonder people who stood still a bit too long weren’t gilded. The younger Bourbon’s reign ushered in a flourishing of the Rococo style. As the author spares almost no details, he recounts rituals down to the au petit couvert—small private dinners—Louis XIV would take in his chamber on a square table in front of a window.

It is rare that anyone was invited in, save the Princes of the blood, he notes, so I was intrigued that the painter Jean-Léon Gérôme took it upon himself to illustrate how an evening may have unfolded had the famous playwright Molière come to dinner (above). An engraving of the painting ornaments the Frontispiece of Volume II of Saint-Simon’s memoirs (below)—the sumptuous setting of the French interiors so over the top, as was the fashion of the time, launching me into my reverie about dining with the king.

The King and I

What porcelain pattern have I chosen to set the table? Bernardaud’s Elysee (below), which Louis-Philippe—the last king of France—ordered for his personal use in the Tuileries. Don’t you think this luxurious china will make for an elegant evening? I wonder what the King and I would discuss as we supped on fabulous French fare? Now that’s a DesignSalon evening I’d give anything to attend!

Lightheartedness aside, one of the things I respect so much about Saint-Simon’s memoirs is that he set out to memorialize the two kings in a way that seemed redundant at the time he wrote them but which means they serve as important historical documents now. Explaining his plan, he wrote, “…experience shows us how much we regret that no one takes upon himself a labor, in his own time so ungrateful, but in future years so interesting, and by which princes, who have made quite as much stir as the one in question, are characterized.” Thanks to this biographer, we understand an important time in history much better than we would have had he not labored to get the material on the page. This is a book I would definitely put on the list when compiling titles for my salonières when the time comes for me to invite a Salon circle together.

I leave you today with the song that inspired the title of this post—Royals by Lorde. As a parting shot, I’ll just say: “You can call me queen bee!”

The Bernardaud website holds a narrative about how porcelain was introduced in Europe, its advent credited to Marco Polo, if you are interested. I’m saving two other patterns by this manufacturer—the Rambouillet Dairy Service and Marie Antoinette’s china—for another day so stay tuned for more imaginary dinners here on The Modern Salonière! If you’d like to know more about the author, there’s an insightful review of Emmanuel Le Roy Ladurie’s biography of Saint-Simon, titled Saint-Simon and the Court of Louis XIV on The Washington Times site. Happy design gallivanting, everyone; I expect to see lots of coverage from #MO2015 (and that means you Cecil and Bethanne)!

Text of We’ll Never Be Royals © Saxon Henry, all rights reserved. Saxon is an author, poet and strategist whose books include Anywhere But Here, Stranded on the Road to Promise and Four Florida Moderns.