A nation’s culture resides in the hearts

and in the soul of its people —Mahatma Gandhi

Soul is one of those words with as many connotations as there are people to consider it. Like truth and beauty, the concept of soul has been interpreted by many of history’s greatest writers and thinkers. Aristotle remarked, “What is a friend? A single soul dwelling in two bodies.” Virginia Woolf proclaimed, “Books are the mirrors of the soul.” And Walt Whitman said, “Whatever satisfies the soul is truth.”

One of my favorite writers on soul is James Hillman who explored Plato’s theory of reincarnation in his book The Soul’s Code: In Search of Character and Calling. He references the philosopher’s Myth of Er to explain Plato’s definition of soul as encompassing a person’s entire destiny—another word that has myriad interpretations.

In a midtown Manhattan conference room tucked into the Welspun USA showroom in the Textile Building a few weeks ago, I came face to face with each of the values I’m mentioning above—all intermingled within a company’s philosophy that was embodied by its managing director of global brands that day.

Her name is Dipali Goenka, and she has been instrumental in championing women’s rights in India, as well as ensuring that Welspun maintains one of the most serious corporate social responsibility (CSR) models I’ve ever come across. She also happens to be the wife of the founder of the company, B. K. Goenka, and the couple is one of those rare duos with a commitment to the greater good.

But Welspun is not just a model for philanthropy, the company is also known for its stylishly comfortable home textiles sold online and through noted retailers like Bloomingdale’s and Bed, Bath and Beyond so I was excited to see their products in person. I present some of their lovely new spring releases and a bit about how they support women in Buhj, India, on Productrazzi today.

Once the Corporate Social Vision (CSV) Roundtable got underway, Dipali explained a bit about the initiatives being furthered by Welspun, which are positively impacting the lives of women, families, farmers, communities and the planet.

They are doing so by empowering women through education and health, by shoring up communities through inventing sustainable commerce, by providing jobs in India’s remote villages and the slums in the country’s larger cities, and by helping local farmers revive Kala cotton crops.

Dipali had set the tone during her introduction with this powerful call to action: “How can businesses be the agents of change?” Explaining the mindset she and her husband had when they undertook their mission to make a difference, she added, “It’s about a focus, about vision; we have the means to make an impact and we have only just begun.”

I was curious to know how the company considers ROI (return on investment) for the labor-intensive and far-flung initiatives they maintain so I asked her. She said she considers the issue from two perspectives: “As a businesswoman, I am proud to say the centers are increasing the percentages of profit each quarter—that’s the practical ROI. But the humanistic return on our investment is the smile I see on the women’s faces when I visit the centers—their jobs are giving them a source of pride and that’s priceless.”

Considering that every seventh towel sold in America is a Welspun towel—flowing forth from retailers like Macy’s, Walmart, J.C. Penney and Kohl’s—the company’s efforts are picking up steam. However, Dipali explains there is so much more to be done.

“Not only are we reviving crafts that were dying out in the different regions of the country, we are improving living conditions as we put money into these communities. But at the moment, there are still far too many villages where they wash their clothes in and drink the same water, for instance.” 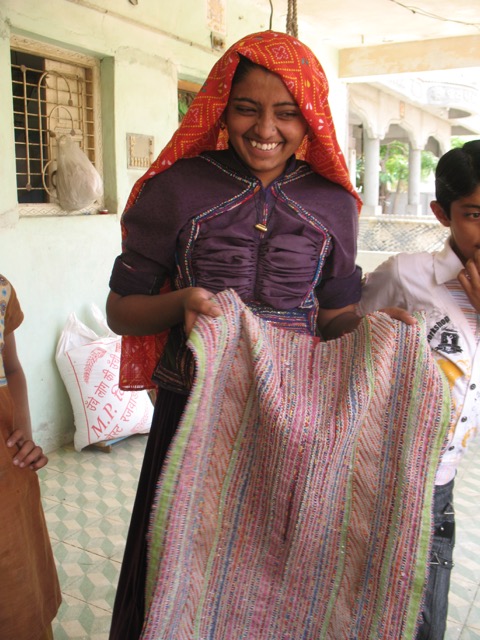 Threads with a Soul

Jessica asked Dipali how social media might make an impact on their efforts and she answered that each of us can help to put the word out. “It’s not about what Welspun is doing; it’s about what we are all doing as global citizens,” she remarked. “Five years from now, what will we have done? What difference will we have made?” Such powerful concerns for a design-centric manufacturer to be asking, and a living/breathing example of Hillman’s premise that we “make soul with our behavior.”

The author believed that soul doesn’t come to the planet ready-made; it begins as an unfulfilled project that is attempting to grow down to the earthly plane. As the SPUN initiative continues to gain momentum, this company is presenting a dynamic example of building soul and I am happy to help spread the word about this member of #AgentsOfChange I’ve just come across.

I will be searching for more examples of this level of altruism to feature here so if your company is involved in CSR or CSV initiatives, please let me know so I can publicize it, will you?

One of the most beautiful pieces of branding collateral I’ve ever seen is an engaging book titled “She is Life” that Welspun produced as a tribute to the women who are choosing to empower themselves by weaving a better destiny for themselves and their families with the company’s help.

The language and photography in the large monograph form a luxuriant narrative presenting women who are finding purpose in life through their handiwork*. You’ll see what I mean if you flip through the material, which I am designating a DesignLabs project with serious heart.

*I don’t use this word flippantly: my grandmother was a professional seamstress, and her quilting and “handiwork,” as she called it, was her greatest pride. I am happy to say it lives on through the treasures I’ve inherited.

This entry © Saxon Henry, all rights reserved. Saxon is an author, poet and strategist. Her books include Anywhere But Here, Stranded on the Road to Promise and Four Florida Moderns.